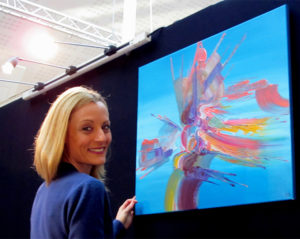 I am a french professional Fine Artist and I live in Paris.
I was born in Angoulême, in 1970. I wish I could die young… as late as possible !
I have always had a passion for colors and tried to use them as words to communicate. I started painting at the age of 7.
Strangely, it is the french – and later english – romantic poetry, which drove me to drawing and painting and enhanced my passion for colours: Charles Baudelaire, Théodore de Banville, Alphonse de Lamartine, Victor Hugo, John Keats, William Blake and other poets from the second part of the 19th century.

Indeed, the symbolic association of words and colours in their clever use of metaphors, circumlocutions and other surrealistic images, fascinated me.
Especially everyday expressions and idioms such as: to do something 3once in a blue moon”, to come “out of the blue”, to show “one’s true colours”, “to feel blue”, to be “in the pink”, to be “black and blue”, to have a “blackhead”, to tell “white lies”, to have a “yellow streak”, to be “green with envy”, to “paint the town red”, to use one’s “grey matter”, to be “yellowbellied”, to be “caught red-handed”, and so on…
At first, inspiration drawn from such expressions drove me to write poetry.
Then it went on to feed my imagination, and convinced me that painting, which allows the use of the widest possible choice of colours and shades, is not only an art form, but beyond this a language in itself!
Granted, a language without a voice, but unencumbered by the limitations of that voice an art form which gave me complete freedom of expression.

In my paintings, I do not so much seek to represent reality as to convey emotions.
I actually paint almost as if I were taking a photograph : when inspiration suggests a new idea, I imagine the finished painting, framed and hanging on the wall. I then immediately give it a name, to fix the concept in my memory. Then I put colour to canvas. The original idea sometimes gets altered, but I generally try to represent it faithfully.
Although I use a very wide range of colours, blue (and more particularly turquoise blue) is an underlying thread in most of my paintings. It is the colour of the sea, and also of the sky, an endless source of wonder to me. I love the sky, for it belongs to everyone, yet no-one can claim ownership of it ! It is a place without boundaries, perfect, harmonious, inaccessible
and a constant source of inspiration ; a place between the past and the future, where imagination can flow freely.

Finally, I like painting in itself, as much as I like creating stories. My paintings are therefore always conceived as if I were writing a detective story : each painting tells a story, and the beholder must find the key to its enigma and its particular message – which are generally to be found in the name of the painting !
To use André Gide’s words, therefore, dear reader, “let beauty be in the eye of the beholder, rather than that which is beheld”.